Unfortunately we were not able to present My Broken Society pages in their correct original format simply because of a lack of funds to keep the code base for the more than 4,000 pages across multiple sites up to date and functioning correctly so that they can remain fully accessible to the public.

It has been an honor and a privilege to provide more than 20 years of availability to those who seek further information on the reality of the global clergy abuse crisis in the Roman Catholic and other religions.

Contact me if you need assistance in locating specific pages orif you or someone you know sees the importance of keeping these pages active by assisting in keeping the full access to the sites information available to the general public.

Got 15 seconds? Take 15 seconds to vote for Prof Freda Briggs in her role as patron of ASCA, a child sexual abuse survivor network which is in serious funding strife and they have literally gone onto these electronic streets with their bowl in hand seeking funding.

IGA supermarkets will donate $5000 to ASCA if she wins the community worker of the year award.

The link is below - this literally takes 15 seconds and can bring a much needed $5000.00 to support those who support child abuse victims.

Your 15 seconds will help go towards funding for a qualified psychologist. These psychological services literally saves lives.

Freda was the recipient once again this year of another prestigious award - however there has been no additional funding made available to actually assist with the work. 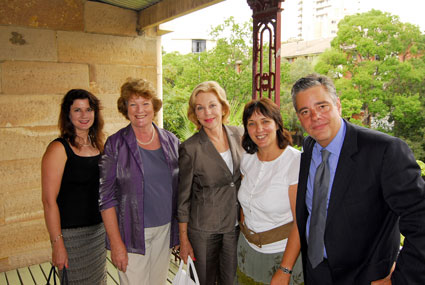 ASCA is proud to have the following people as its patrons:

Professor Freda Briggs is Foundation Dean of the De Lissa Institute of Early Childhood and Family Studies, Professor of Childhood Development at the University of South Australia,recipient of the inaugural Australian Humanitarian Award,ANZAC Fellowship Award, the Jean Denton Memorial Fellowship,the Creswick Fellowship Award and the Senior Australian of the Year Award 2000. 'In the 2005 Queens Birthday Honours, Emeritus Professor Freda Briggs, ASCA's patron received an Officer (AO) in the General Division Award for service to raising community and professional awareness of child abuse and neglect, and as advocate for effective child safety education programs.'

2005AW Jones Foundation Oration in the Edler Hall at the University of Adelaide on 9 March 2005, entitled Every School’s Worst Nightmare: Child Sexual Abuse.(PDF)

Photographs of Freda Briggs and the new plaque unveiled by the Prime Minister for Australia Day 2006 on the walkway of honour beside Lake Burley Griffin, Canberra. 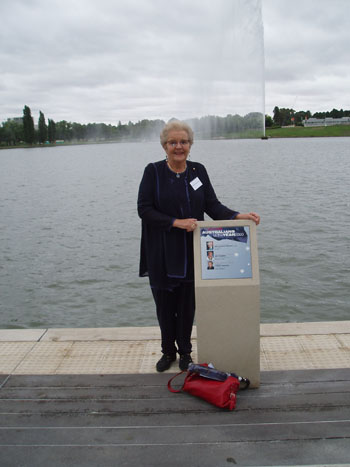 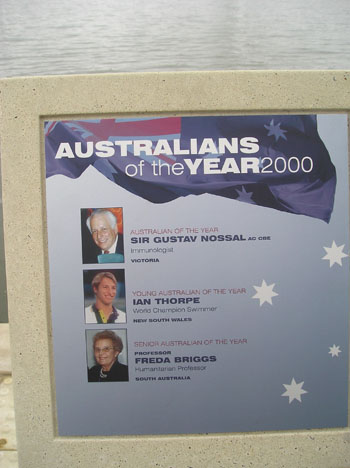 Ita Buttrose is not only a businesswoman, journalist, author,TV panelist and presenter but has also contributed widely to many areas of community need.

Ita has had an extensive and impressive career in print,radio and television. She is a former Editor-in-Chief of the Daily Telegraph and Sunday Telegraph, Publisher of ACP Press Ltd Women’s Division responsible for The Australian Women’s Weekly, Cleo, Belle, Bride and Mode. She was the youngest-ever Editor of the Women’s Weekly, founding Editor of Cleo and Editor-in-Chief of the Sun Herald. She has been honoured with a number of awards and appointments some of which have been groundbreaking occasions when she has been the first woman to have received such award or appointment.She is currently Editor of bark!, Consulting Editor for Highlife Magazine and Editor-at- Large for OK!Magazine.

She is the author of seven books including her best-selling autobiography called A Passionate Life. She has recently completed her eighth book - a motivational book - which will be published by Penguin in October this year.

In 1988 appointed an Officer of the Order of Australia (AO)for service to the community, particularly in the fields of medical education and health care. In the Queen's Birthday list 1979 she was appointed an Officer of the Order of the British Empire (OBE) for service to journalism. She was the first woman to be awarded the Harnett Medal for community service and achievements in publishing, journalism, radio and television.

"With the incidence of abuse continuing to rise,the population of survivors is burgeoning and their needs are not being met by mainstream services. The persistent lack of (Federal and State) Government support is causing the impact of child abuse to cripple the adult lives of survivors throughout Australia...

"What I most like about ASCA is that it gets positive results. Through the care and expertise of its volunteers,ASCA helps survivors of child abuse overcome the shame and hurt so many of them feel, and equips them to face the future in a healthier, more positive way...

"ASCA has been leading the way for 10 years. Its work is invaluable and makes so much sense that you have to wonder what it else it has to do to receive some kind of ongoing Government funding. Even though child abuse is a major social and mental health issue in Australia – and survivors one of the neediest groups in our community – ASCA receives no recurrent Government funding, State or Federal....

"ASCA is the only national organisation that cares for the needs of survivors of all forms of abuse and neglect and it does so primarily with volunteer labour. It fulfils an important need in our community...

"When I meet and talk with child abuse survivors I give thanks for my own carefree and innocent childhood.As a patron of ASCA I am committed to help survivors overcome the silence and stigma that perpetuate the victimisation of this group." (Ita Buttrose)

Mikey Robins is one of Australia's best loved, intelligent, hilarious and most in demand entertainers, his career in both radio and TV has led to him becoming one of the most recognisable faces and voices in Australian entertainment history. He has recently joined the breakfast team at Radio , VEGA 95.3.

"I have always felt that no society can be considered whole until it's most vulnerable members feel safe." (Mikey Robins)

Laura Robins is a long term supporter of ASCA. She has a strong social conscience having previously proven her mettle with a 2 year stint as Mikey’s manager, has returned to university to complete a media and communications course.

"I have the greatest admiration for people who have survived the torment of child abuse in all its forms. I believe it is important that there are organisations like ASCA to support their recovery, support they were not given when they were a vulnerable and powerless child." (Laura Robins)

A lack of denial is a terrifying thing to encounter by those still immersed in hiding from their own failings.

What's HOT on The FAQyMe Gene?

#457 4th Degree Oath of the Knights of Columbus

#504 Should failed religions be afforded funding and protection in Australia?

#456 Have you watched the Marita Murphy story? ''You be the Judge''

#466 JohnB and Ken using the World's most Powerful T-Shirt to Explore the Misogyny, Rape and Destruction of Natural Societies and more

Recently published on The FAQyMe Gene

#566 A Dabble into Dysfunctional Intergenerational Trauma

#565 You have been temporarily redirected - see below for details

#564 Do You belong to a Protected Supernatural Culture?

#563 Note to the world: Technology kids, Millenials and those raised with a mouse in their hand

#561 Marita Murphy and John Brown - what are they talking about?

Constant favorites on The FAQyMe Gene

#142 How aware are Australians of the truth of the cover up of the sexual abuse of children in 2018?

#456 Have you watched the Marita Murphy story? ''You be the Judge''

You can directly support my work at PayPal John A Brown. Read more about John Brown here

Were you like so many others born into a constitutionally protected God based death and rape culture?

Copyright The FAQyMe Gene © 2022. Trauma in Religion - The JohnB Experience of Secular Survivorship in a Religious Rape and Cover Up Culture Site Map
IP Geolocation by geoPlugin